Is it Possible to 3D Print a Buildings

As the worlds clock turns to the year 2020 we still face many issues as a society. One of the biggest issues we face as a planet is the housing crisis. There are currently 150 million homeless people in the world; a number that is climbing every year. Some architects believe the solution to this crisis could be the use of 3D printing. Due to the lack of materials involved the process, this passage will explore the validity of this statement. 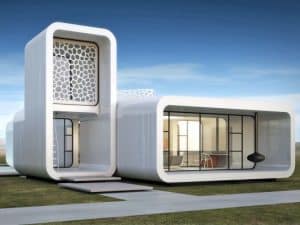 There have been ambitious architects throughout the world who have achieved the feet of creating an entirely 3D printed building. Like the WinSun company in China who managed to create an entirely 3D printed villa. This is a clear separation though, as we are not trying to build villas for the world; but actual affordable housing. This is where the Austin, Texas based company ICON comes into play. The tech start-up actually has the ability to produce a 2000 square foot house in under a week, for under 10 000 dollars. This clearly shows there is the potential to quickly produce a line of affordable and safe housing throughout the world.

The next issue to be faced is the structure of the building. As mentioned earlier in the passage the most famous 3D built structures have all been built in relatively developed and safe nations, but how would these buildings fare in a less developed countries. These nations may face issues as they do not hold an abundance of concrete unlike their wealthier counterparts. This issue may have been solved by the Italian based WASP company. They have managed to develop a 3D printed building that relies on the use of mud as a binding agent instead of concrete. This means their 3D buildings can be printed anywhere in the world. Which completely breaks down the ecological barrier.

The next issue to face with a 3D printed building is the innerworkings and plumbing. It is probably not the first thing that comes to mind when you think of 3D house printing. It also one of the major factors that many developers lie about when they present their 3D houses. It is not exactly a fully functioning 3D house without plumbing. The idea of 3D printing an entire plumbing system is quite difficult to imagine. This is due to the complex nature of a plumbing system. septic tank companies like septictankpumping.directory have plumbing outlet in every American state so the actual installation would not be the problem. Companies like the aforementioned septictankplumbing have already started 3D printing parts of a houses plumbing system during repairs. So, when building a house from fresh it would not be entirely hard to imagine a completely new house using an entirely new 3D printed plumbing system.

This passage should highlight the fact that 3D printing can become a major power in the housing market. With companies sprouting throughout the world perhaps by 2030 we may have completely solved the housing crisis.